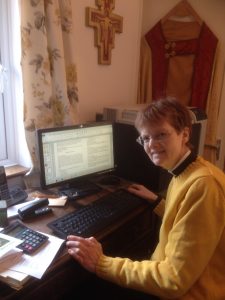 I am a priest in the Church of England, and am Priest in Charge of East Mendip Trinity (Coleford, Holcombe, Kilmersdon with Babington). We have three parish churches, one in each village, and a retired church just outside Holcombe where we have services four times a year, as well as St Margaret’s Babington which is licensed for weddings, Christenings and the odd other service. I was ordained in 2006, and Elinor Brent-Dyer was a big influence on my Christian faith; she remains very important in my life.

I first started to read the Chalet School stories in the mid 1960s when I was about 10 and used to borrow them from my local library. When I was 12, I bought four titles – Highland Twins, Lavender, Peggy and Joey Goes to the Oberland, but then moved very suddenly to adult books. However, from the age of about 19 I used to buy the Armada paperbacks, and haunt every jumble sale in my area in London. Gradually I acquired some hardbacks, and then some years later, after I had moved to Coleford, I first visited Hay-on-Wye and bought quite a lot more. A little later I met other collectors and discovered secondhand dealers, discovering, too, that EBD had written not just the Chalet School books, but lots of others as well. I began to love different editions of the books, and in many cases have a number of copies of each title.

I also read and collect quite a number of other authors, some of whom are published by Girls Gone By.  (I read a lot of theology and other church books as well – and of course the Bible.) Other hobbies are a bit difficult to define, because so much of what I enjoy is bound up in what I do.

Health wise, I have M.E. which means I have to be careful about how much and what I do, but I am now able to space out what I do, and how I do it. 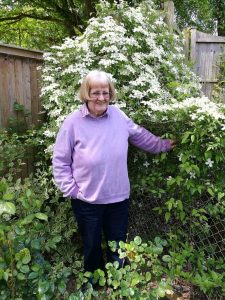 I spent the first 16 years of my life in Scotland, near Glasgow, and then moved to Australia where I became a teacher. I retired from teaching some years ago, and moved back to the UK. I have a very bad back complaint, so am not able to do as much as I would like, but I love gardening, and also anything to do with flowers. I am also a regular visitor to my local W.I. Market.

I began reading the Chalet School books at the age of eight, and borrowed them from the library, reading all that they had. When I discovered others who read them, and was able to read the whole series as well as EBD’s other books, it was as though a door had opened. Founding Friends of the Chalet School is probably the most important thing I have done in my life.

Like Elinor, I became a Roman Catholic, converting from being a Scottish Presbyterian in 1974. Now, I am a member of the Church of England and am sacristan for my local church, as well as doing the church flowers, and a mass of other jobs. I can honestly say that Elinor has been a huge influence on me. 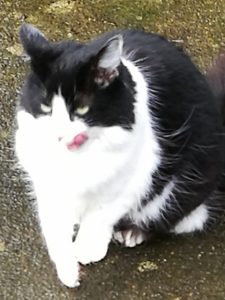 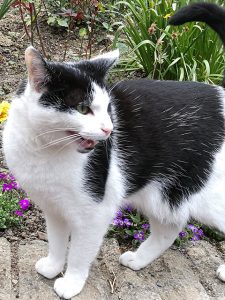 We are now nine. In some ways that is easy to tell (we no longer run off with anything lying around) but in other ways we are as young as we were when we were kittens. We have a large garden – this consists of the Vicarage Garden, the Old Vicarage Garden, Pennant House Garden (just below us, and it used to be part of the Vicarage Garden) and the Churchyard. We consider all of this to be ours, although Badger lives in the Old Vicarage and Cosmo lives in Pennant House. They too share all four of these areas of our garden. In the summer we spend a lot of time out in the garden, in the winter not quite so much. We are also very good at catching mice (in spite of the fact that we wear collars with two bells on them). Jill will kill her mice, but Jack likes to bring his in alive, and then he lets them go and loses interest. 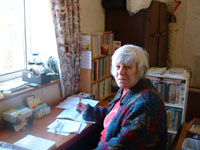 I am a retired nurse married to another retired nurse whose ‘hobby’ is selling spares for British Classic M/bikes. That takes up a lot of space that could be better used for the FOCS Library.

I have done the Library for about 25 years now & I did NOT realise what I was letting myself in for when I volunteered!! In spite of that statement, I enjoy sending out about 100 books each month. I know so many members, their children, grandchildren, cats & dogs. The thing is that I wouldn’t recognise more than 1 or 2 of you if I met you! It has been lovely to meet some of you at various functions. I have photos & postcards sticking out from between the books which are changed when they fall to the floor once too often.

The Library used to be just EBD’s books & in one bookcase downstairs but I have had to move it upstairs to the spare bedroom where it now overflows from 3 bookcases & several boxes (for the photocopies) taking up the room I need for a second bed!! Only one guest at a time now! There is now a Book Annex  which has books by other authors, some suggested by you & others that I thought people might enjoy.

When I am sitting at my desk I have a lovely view up the field with trees to the left. There are deer, bunnies, foxes, pheasants, buzzards, redwings, song thrushes, tits of nearly all varieties etc. We used to have 3 sorts of Owls nesting nearby but now see only  the barn owl occasionally.

I can’t think of anything else to tell you – except please do not complain that you can’t read all the series as they are too expensive to buy.  The Library is here for you & there are ALL Elinor’s books here. Even if you have the original you can still borrow the GGBP ones to read the extras!